Saying goodbye to a family home: A Eulogy to the House at Cedar Point

A love song for a house

The whitewashed clapboard from the original 1850 gabled farm house forms the back wall of the enclosed porch and sags in spots punctured with nails that held photos and nautical décor.  The house feels sleepy with the dark green shutters closed and windows boarded over.  All the old well-loved furniture is gone except three wooden folding chairs that were used on the lawn. The first floor, flooded in 2003 by hurricane Isabel has two new doors facing East to Herring Bay and several walls of dry board spotted with white paint over new nails that were not painted after repairs.

The linoleum flooring put down to cover original wood planks is dusted with leaves blown in through cracks in the pantry floor that were never repaired.  Sunlight streams through slits in the shutters dappling the peeling walls.  Musty smells are swirled about by stiff breeze from the north-west that bends over small bushes and gusts through locust and cedar trees. 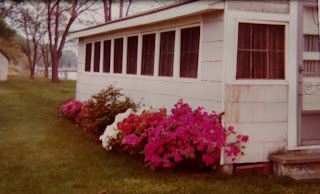 A tall Catalpa tree is in bloom with sweet smelling orchid like flowers and the beginning of bean pods.  Black marks from a 2005 lightning strike mark one side.  The bees buzz between the tree and nearby honeysuckle that spreads over a mound of tree limbs and debris.  The purple iris that surround the brick foundation of the dairy which washed away in the hurricane have faded for the season as have the pink, red and white azaleas that hug the front porch.

The warm winds ripple the Chesapeake Bay into frothed waves and rush the Rockhold Creek waters onto the stone jetty and old wooden pier which is pocked with rusting nails and strings of fishing line.  A few new boards nailed into gaps were salvaged from debris floating at the grassy shore line.  Warblers and robins flit between trees and the gabled roof with missing shingles.  The large osprey nest snuggles the top of the tallest red brick crumbling chimney and the parents call warning to anyone threatening their nest.  Father Osprey is sent fishing several times a day while Mother guards the collection of haphazard string and sticks she has built annually for many years.  Blue heron and gulls glide across the white caps to land on the stone jetty recently rebuilt from the 1939 original construction. 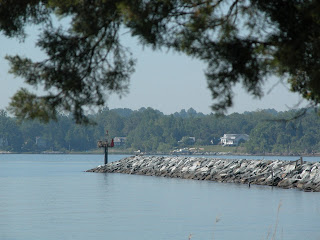 At the end of the jetty a red light blinks warning to the parade of boats returning to Rockhold Creek from the Bay.  Wednesday nights the sailboats race on the horizon and this week the strong breezes make a rainbow of lapping sails in reds and whites and blues and yellows. The cedar tree at the edge of the house is home to cardinals and robins and humming birds.  The sweet smell of the wood mixes with the honeysuckle winding up the trunk to scent the air towards sunset. 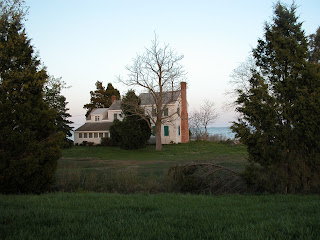 The yard takes on a golden hue as shadows lengthen creating a Kodak moment photographed by four generations of women over the last 98 years.  Memories of picnics and birthdays and the tug of loving faces no longer here to see the sailboats on the horizon or feel the salted air or hear the Osprey’s warning fill my heart. 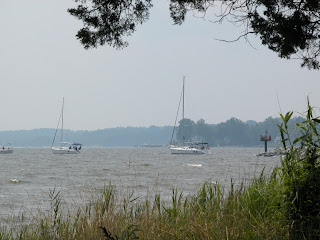 On a June Friday, the parade of boats from Rockhold Creek to Herring Bay signals the start of the weekend.  Low tide and soft breezes all day created muddy spaces on sand bars where gulls and osprey put footprints in the sand.  Swiftly about 5 pm the tide started to rise and stiff breezes whipped up white capped waves.  The smells of mud/seaweed and fish began to dissipate.  Clouds thickened and osprey trios found wind tunnels to circle over the waves. 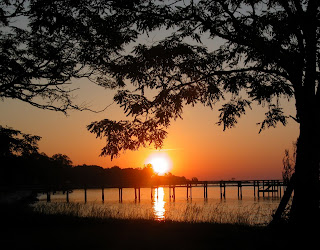 The next morning was the last day and the sunrise was spectacular.  As I turned to leave the yard for the last time, the osprey waved. 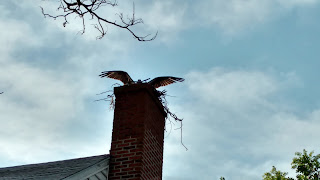 Blessings to those who come after may they treasure the baby osprey on the chimney and the bunnies under the house, the holly and cedar and the vista.

Posted by Ancestor Encounters at 7:19 PM