The Invincible Summer within us for 2021

How beautiful the notion that we have the power to walk through storms with calm and courage.  Albert Camus wrote his poetic words in 1952, several years prior to my own birth, but they resonate in 2020, the year of fear and turmoil for so many around the world.  May 2021 be a year of peace and light. 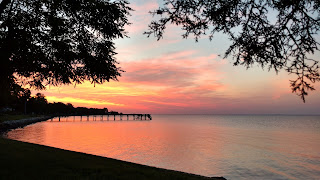 Posted by Ancestor Encounters at 12:26 PM

Patience in genealogy Pays off

Nana and Granddad spread enthusiastic positive energy whenever they entered a room. They were so encouraging and kind that when a cousin married into their family, I adopted them as grandparents. In some small way to repay their kindness over the years, I used genealogy research to reconstruct their German roots ending in my visit to their European hometown where I took a picture of their ancestor's home and church. There was one line in their family trees that stayed empty on the pedigree chart. Granddad grew up longing to know something about his mother's family. His mother avoided the subject of her family and questions asked about ancestry were never answered. As an only child whose father died in WWII, Grandad's questions about family were important to fill the empty spaces. After his mother's death we looked for clues for several decades hoping to find something in records or artifacts that would tell us where she came from. There was an old school book with a Virginia address inscribed on the front page, a story about her mother named Ruth, and several anecdotes about an old southern plantation that just didn't seem to fit anywhere in the ancestral picture.

Hired researchers, ordered documents, hours online and in archives pouring through records, we always hit brick walls. Suddenly last year Granddad remembered visiting a family in Baltimore on Southern Avenue that he thought might have been relatives. Having long ago run out of any other leads, we looked in census records to see what we could find. Only one family in that area matched the description, so in-depth research on the occupants of that home in Baltimore led to a woman named Ruth... Ruth was the great great grandma we had been searching for, although it took some detective work to piece together the story. As one clue followed another leading to an online researcher who posted her family tree, collaboration through emails and finally much anticipated DNA results proved the connection. After so many years wondering about his roots Granddad suddenly had live cousins and a robust family tree. At age 91 Granddad knew his mother's story at last bringing peace and forgiveness.

To be ready for the sudden clue it was imperative that we had organized our many years of research. The long lost memory reignited the search for Grandad's family, but the clues meant something as we pieced together the story bit by bit because we had outlined all the known facts over many years. We knew Granddad's mother spent time in the Norfolk, Virginia area from the address in her old text book so when the Baltimore address led to a study of the family who lived there and we found an uncle who had lived in Norfolk we had a trail of clues to follow.

The uncle from Norfolk had married Ruth Lavinia. It was Ruth's second marriage and we eventually discovered that she had three daughters and a son from her first marriage who were put in an orphanage after her first husband left their home and divorced Ruth. The son died at the orphanage shortly after the children arrived in 1912, the oldest daughter lived until adulthood at the orphanage and workhouse, while another daughter was adopted.

It was the adopted daughter's descendants who submitted DNA testing and posted their family tree online which led to the orphanage records and showed the 4th child of Ruth, Granddad's mother, taken to the orphanage at age 5. The birthday and given name was exact and then we were able to trace forward through Norfolk and Baltimore records. Ruth had gone back to the orphanage looking for her children after almost ten years and her remarriage. Her son was dead, one daughter adopted so she took Granddad's mother to live with her in Norfolk.
The descendants of Ruth's adopted daughter shared the few recollections about the children's orphanage experience they could glean out of conversations over many years. Although reticent to talk about those years, she said it was cold the day the children arrived at the facility and the siblings were separated upon arrival. The work cleaning and washing was difficult for the children and there was no love in the place. Those few memories are sobering to all Ruth's descendants as we remember those four children with breaking hearts.
Children's Home
Without the kindness of genealogy collaboration with strangers met online, the story of Ruth and her children might never have made it's way to Granddad who needed to know the bleakness of his mother's childhood in order to fully forgive her fabrications and evasions in questions about family history. Patience this time paid off along with lots of luck, a twinkling of memory, a family hundreds of miles away who took DNA tests and were willing to share their stories, and hours of careful research in documents that fit together with years of organized clues. Patience in genealogy sometimes pays off.
Posted by Ancestor Encounters at 10:58 AM