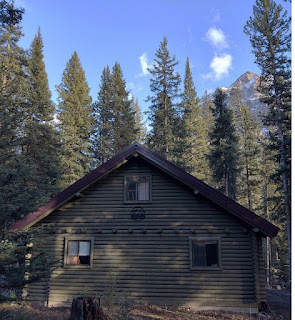 At the little green cabin on Soda Butte Creek, the sunlight filters through the swaying branches of the tall lodgepole pines as the sparkles of sunlight bounce off fast-moving currents of the creek and peek through the greenery. The bushes and trees hide chipmunks and squirrels and the tiny fawn who visits in the evenings and the mother Fox with new kits.  Republic Mountain with waterfalls from melting snow can be seen to the south across the creek from the big picture window in the cabin.  Inside, hanging on the wooden logs, a hand-painted wolf dreamcatcher made by my daughter guards the front door which sets the mood for reflection. The photographs on the walls taken by our family show wildlife viewed over the years. There is a crackling fire in the wood stove and a small pile of the many logs that my oldest son cut when he visited in May. I cozy up to a blanket that my youngest son gave us last July when he visited. This is a family place.

Although not an outdoor person by nature, it is a spiritual experience to view the jagged snow-covered mountain peaks and wide expanses of green sliced by rapid rivers, smell the sagebrush as bison tramp through the blue-green bushes, and hear the sounds of eagles, osprey, and falcons soaring above.  There is scenery and wildlife to appreciate at every turn. From the waterfalls at Artist Point to the confluence of Lamar River and Soda Butte Creek the vistas are breathtaking. There are geothermal features at Mammoth Hot Springs and the Dragon’s cave just beyond Hayden Valley. Wild life at day break in the spring can be seen nursing newborns or hunting for food. Wolf pups go tumbling down the hillside near their den while bison calves hop in play battles, grizzly mothers climb trees with their cubs and a mother badger pushes her young towards their den to avoid aggressive tourists and we capture it all on film.  The fuchsia pink fireweed, the watermelon red paintbrush, and the lavender lupine add spectacular color along with gold and cream wildflowers at every turn.  We find moose in the willows and coyotes running through sage, beaver dams that flood the front yards of friends in Silver Gate and adorable pikas hiding in rock formations, and bald eagles that survey Slough Creek.  The drama of grizzly and wolf and coyote struggling to survive amidst herds of bison and pronghorn play out on the valley floor along the Lamar River bring us close to nature and allow us to share with each other once-in-a-lifetime moments.
The land between Silver Gate and Cooke city has witnessed various travelers through the centuries: native American hunting parties, miners panning for gold, real estate investors and developers, and those who love the flora and fauna of this private stretch of woodland within the Custer Gallatin National Forest. The history of the community starts with the Native American tribes pushing back against western expansion and the discovery of valuable ores in the region.  The Crow nation had several treaties with the U.S. government that were renegotiated over many years as white settlers entered the area.  In July 1870 gold was found near Cooke City, and although the ore was located on Crow land, prospectors flocked to the area and began to call for easier access to the remote mountain region and the ability to stake claims to the land. By 1882 the Crow lost the mining region and were pushed east and the mining lands northeast of Yellowstone National park were available for settlement.
A small group of wealthy investors from Minnesota created the Cooke Placer Mining Company in 1890 and hired miners to work the claim by panning for gold in Soda Butte Creek.  The company was never profitable and by 1937 had ceased operation.  Almost from the moment of the discovery of ore in the Cooke City area, battles between land rights for Native Americans against claims by prospectors along with battles between naturalists versus the operators of mines that polluted streams and groundwater raged in the local press. Professor C. G. Swallow a geologist and mine inspector wrote in 1889 in support of rail lines and transit to the area for support of Cooke City mining. In 1893 the superintendent of Yellowstone National Park submitted a report stating the mines in Cooke City did not have robust outputs of ore and the 100 inhabitants of the town were not worth a rail line or better transit. Experts on both sides of each issue can be found in the Montana newspapers before 1900 explaining their positions.
During the 1930s the area began to develop for tourists to Yellowstone. Hotels were built in Silver Gate and a real estate agent together with a lawyer ordered land platting of small sections along the road from the Northeast entrance to Yellowstone. By 1970 a community between Silver Gate and Cooke City had tracts of land for sale.  Basting Tracts was created by a descendant of an original Cooke Placer Mining shareholder.  One of the first lots was purchased by a builder from Missouri who built the little green cabin along Soda Butte creek and his family cherished the spot during warm seasons for many years. The bison still visit along with the fox and moose and as the current caretakers of the land, we appreciate the vista and remember those who came before. 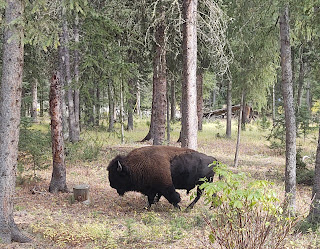 Bison in the cabin front yard
Update 13 June 2022, the devastating flooding that occurred along the Yellowstone River overnight due to melting snow and savage rainstorms caused much damage to the area between Gardiner to Cooke City and beyond isolating those communities, damaging bridges and roadways which forced the closure of the northern section of Yellowstone and will cancel the plans this summer of many wildlife and nature tourists who expected to visit and make commercial enterprises around the park difficult.  The little green cabin stands, but many residents are hurting at this time.  Our thoughts and prayers are with them during this difficult time.
Posted by Ancestor Encounters at 12:00 PM