A house history: The House at Cedar Point

I fell in love with land records because my extended family has waterfront property that we all used as a summer home.  I spent hours listening to my grandmother’s stories and viewing her collection of artifacts and family pictures which she has collected in a history room.  Old irons, butter churns, and a trundle sewing machine… sparked my interest in history, family lore, and life in a small town in southern .  I eventually graduated from college with a history and education major and taught high school for several years.  Over the past 25 years, I have worked on my genealogy and research credentials and am now a Certified Genealogist. 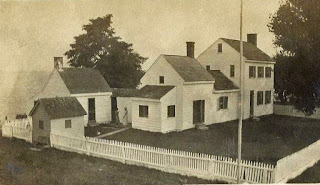 The house is an old multilevel farmhouse added to over the years with a wonderful vista. The view from the front picture window is breathtaking.  The 2.5 acres is a point jutting into the  with a stone jetty that separates Rockhold Creek from the Bay.   I began to ask questions about our history at the Bayhouse and discovered from my mother and grandmother, that my great grandfather, Hugh Roberts, followed an ad in a  newspaper and took his wife and two children to view the farm in September of 1918.  He put a deposit down on September 7 and settled later that month.  Over the winter Hugh allowed the family who sold him the property to stay in the house and the Roberts moved in during the spring of 1919.  Hugh Roberts came from a line of boat pilots from  and he wanted very much to be near the water.

By 1923 a porch was built onto the northwest side and a 2nd-floor floor room was added to the middle section about 1930. During the 1920s my great-grandmother ran a boarding house.  Friends from Washington, DC discovered the town's charm and lots were for sale. Boarders would stay at the Roberts' house on weekends watching their new summer homes being built.  A storm in 1933 destroyed the summer kitchen and we all felt history repeating itself 70 years later when Hurricane Isabel hit in the fall of 2003.  Ownership has changed within the family over the years, passing down through the generations. 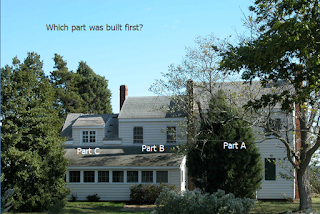 Which part was built first?   Family members over the years have debated how the house took shape over time.  Several members thought that part A was the oldest with antique trim and two stories.  Others thought that parts B and C were the oldest with lower ceilings and more rustic trim.  Nothing in family lore gave us an exact date and no records seem to exist to date the construction.  I began to take courses in house history and deed research.  I finally hired a historical architect who toured the house in July 2002.  He labeled the house by section to make discussion easier.  We tested paint, nails, and wood, and took measurements of fireplaces and floorboards.  For several hours we tromped through the summer heat into every nook and cranny.  I got such an education in types of glass and window construction, the configuration of doors and windows, and how all that comes together to help date a house.

His written report declared the house c. 1830-50 for many reasons including the type of nails, the design of the wood trim, the narrow floorboards, the 9/6 window pane configuration in the first-floor section A room, the small fireplaces, no map pre-1850 shows the house and there was no road to the point to allow farmers supplies in and out.  The most interesting fact was that the construction of all 3 parts took place at/about the same time!  The whole family was wrong!  All the trim and nails were made of the same material the entire way through the house.  All doorways in 2002 were pieced together in undisturbed construction on both sides.  What we then began to ask was why such an unusual construction with a lower middle section.

September 2003 we still had no firm answers, but I had begun the process of deed research and then hurricane Isabel did much damage to the foundation hurling rocks from the shoreline into the front of the house.  So much damage was done that I was afraid we might not be able to rebuild, so I made many phone calls to the county and began to communicate with the county historian.  She came and toured the house giving a second opinion on historical architecture which confirmed the first report. Together we pieced the reports to the deed research I had begun and concluded that the house was built about 1850 by the new owner Captain Benjamin Davis.  An old family story was told about the property originally being a ship’s supply store, and the pieces of the puzzle began to fit.  The lower ceiling in section C could have been the storage room or quarters for the staff.  The fancy trim in section A could have been because the family was entertained in that part.

The House at Cedar Point history through deed research:   I was hooked on the history of Cedar Point and spent many hours in the Maryland Archives in , the Maryland Historical Society in , online, and in libraries in  and .  I did microfilm deed research back to the original  grant to Richard Gott in 1649.  The Roberts family is only the 7th family to own Cedar Point although several families passed the land through generations of family.  Although most historical research needs to start with the present and work back, the explanation of my findings seems easier to understand if I start with Richard Gott.  I worked for 3 years trying to configure what happened to the land, who lived there, and how they lived.  A presentation to the village historical society, the local Rotary Group, and a booklet published the findings. 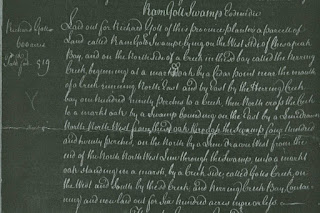 The history of from the original land grant
Richard Gott received a patent for 600 acres which he named .  It was described as lying on the West side of the  and the north side of Herring Creek.  The trouble with surveys in the 17th and 18th centuries is the inconsistent and inexact nature of the description.  The mapping of the deeds is a work of art, somewhat subjective and creative to fill in the blanks left by the old surveys.  I wanted to envision the parcel of land in comparison to the village today and to our family parcel at Cedar Point.  Using a wonderful software called Deed mapper and taking several courses in deed plotting, I have constructed what "Rams Gott Swamp" (the name on the original deed) looked like laid over the roads of today’s town. 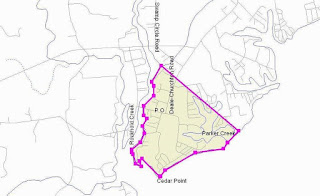 After I could see what Gott’s plantation looked like I couldn’t sit still until I knew how it was broken up, by what owners, and why.  It took only 35 years for the Gott family to start selling off the plantation.  Tobacco farming was difficult and unpredictable work with many ups and downs.  Richard Gott arrived in 1650 and died 12 years later leaving the plantation to the care of his widow who quickly remarried.  The oldest son would not inherit until 1670, so for 6 or 7 years Henry Hooper, stepfather ran the farm.  The plantation was in trouble for a while as seen in the court case stating in 1666 which described five armed and angry neighbors who attacked  taking off cattle and tobacco apparently upset about payments due.  The entire Gott family history is well researched and described in a Maryland Genealogical Article found at the Historical Society in Baltimore.

Richard, Jr. turned 17 in 1670 and must have continued to have a difficult time making ends meet because in 1685 he began to sell off parts of the plantation a little at a time.  Richard died at age 62 with only 105 acres left of the original land grant.  Over the years the new owners bought and sold parts of the Swamp and I wanted to construct a series of maps showing the changes over time in Deale.  I believe the original Gott house was along the banks of Mimosa Cove as that is the section of the original plantation the Gott family kept for 150 years.

I have studied the deed search for the Cedar Point area most carefully because of my interest in the southern part of .  I did a genealogy study of each family who lived there to know something about the occupations and lifestyles of those who lived on the land.  The most interesting for the village that became known as Deale is the 240 acres bought by Captain James Deale from the heirs of John Giles in 1735 and 1737.

Map work and census work have supplemented the information we have about Deale in the 18th and 19th centuries.  An 1846 map shows several households and field divisions but no house at Cedar Point.  A Study of the 1860 census which is the only one that Benjamin Davis appears in the Deale area shows he lived with several mariners on just a few acres supporting a family but he was the wealthiest in both real estate and personal property in the area.  He could not have supported his family by farming the small acreage and must have been involved with marine life somehow with two black and several white mariners on his land.  This fits well into the ships store theory.  I continued to analyze the census material through the years in the Deale area and became fascinated with the change during the 1870s from farming occupations to watermen.  The 1860 census shows the area was more populated with watermen because of those living at Cedar Point.  By 1870 the number grew to 16 watermen and within 10 years there were 45.  The 1860 Martenet map and the 1878  map show the  property at Cedar Point.

A house history can focus on just a Chronological list of families who lived on the property or it can include information about the construction materials or expand to cover the neighborhood or town.  In the study of the House at Cedar Point, I let the documents take me in various directions.  Follow the story that speaks to you about a family property or historical site.  To do a thorough house history and glean genealogical data from documents and interviews.  Flesh out the story of the house with details of the people who lived there.  Find out names, dates, family members and their relationships, and locations.

Location information leads to other research.  Local churches may have information on the family and property and the study of neighbors may lead to immigration information or other relatives.  The nearest courthouse might not be the only repository of documentation as homeowners may have recorded information elsewhere.  Get copies of Deeds and then using clues within the document trace back through time going from one deed to the next.  Start with the most recent and move backward in time.  Visit the homestead and walk the ground, take pictures and find maps over time that show the land.  Use plotting of deeds and software such as Deedmapper to create pictures of the property.  Communicate findings in a word document or picture book or publish online, but take time to share with others who may be interested in the property and add to your collection as new information becomes available.  Putting down your findings in a story allows you to find areas for further research and keeps your information organized for future use.  I played the song by Miranda Lambert, "The House that built Me" for inspiration while I researched my family home.  Happy House Hunting :)