When History goes up in Smoke

At 5:34 pm last night my phone lit up with the message "your house is on fire." My heart stopped, I opened the attached picture and started to cry. I knew the sender of the message who now lives in Texas and recognized the picture, not of the house where I was eating dinner, but the site of my ancestral home I sold several years ago. It was on fire. Friends saw the black smoke rising over the trees, realized the location, and took out their phones for photos.  The pictures bounced from Maryland to Texas to Pennsylvania to New York and then Washington State. Calls, emails, and more texts poured in throughout the evening as my children and old family friends realized I would feel profound sadness as a part of my family history was destroyed.  I soaked up all the bits of news as the flames were put out so many miles away.
Sorrow swept through the family as one by one we realized that the home our family had owned for 100 years was in crisis. Gratitude that the members of the family who have passed away would be spared today's trauma overshadowed the regrets that the vessel of the memories of so many family events was disappearing. The gabled house on the point of land where Rockhold Creek merges with Herring Bay has stood guard since 1850 and through the thoughtless actions of teens on a lark was to be no more.
We are so grateful for the Herculean efforts of the volunteer fire department who had over the years many times visited the property to rescue weekend sailors who had crashed their boats on the rocks coming back into port, and once in 1957 when my great grandfather, fighting dementia, had wandered out in a snowstorm and was lost. But last night those brave firefighters poured water on the old attic trying to diminish the flames and then searched for hot spots until dusk.
As we honor our family's heritage in this age of climate change, natural catastrophes, and sometimes deliberate damage, it is important to document with story and photos the artifacts and properties of our ancestors to savor all that they have meant to our family and share with those yet to come.
Tonight I am reminded that community comes together to mourn the loss of history and support, even virtually, during times when others feel loss. I researched the property over the years, lectured on the history of the area, published a BOOKLET sold by the local Historical Society, and crafted house history essays in this blog. Now my EULOGY for a house is truly a sad song saying goodbye to a piece of history that last night went up in smoke.
Posted by Ancestor Encounters at 5:59 AM

Sometimes the most important documents, photos, or artifacts in our family history come to us from distant family who kindly passes on wonderful treasures like the family bible or a photo of a long-lost relative.  As the extended family all know that I have a passion for genealogy, often envelopes or boxes of items get passed on to the nutty family historian.  Sometimes the treasures are right under our noses, and we had them all along.

I was in charge of the care of my mother's house in Pennsylvania during the summers when she stayed at the ancestral home on the Chesapeake. One hot July day in 1997 early in my family history journey I was doing the weekly chores sorting mail and watering plants when I remembered a scene as a young girl talking to my father in my parent's basement when he pulled out an old photo of his puppy and one of his mother who had died in 1912.  It occurred to me that the photos were still in the house, and I poured over every box I could find without success.  Discouraged, I sat in Daddy's easy chair to think and spoke out loud my frustration and plea for guidance. Suddenly I had an idea for a hideaway in the basement, zoomed down the stairs, and within minutes had two old wooden trunks filled with documents, photos, jewelry, locks of hair, tin types, albums, newspapers, and more.  I was crying so hard that when I called my mother in Maryland I couldn't make myself understood and frightened her.  It took some time to convince her they were tears of joy.

Inside the wooden box were documents from the family including a legal-size sheet that described a 1920 family reunion of the Eisenberg/Jones family.[1]  It gave some history that led me to research our connection, and all at once I was related to a family that settled in Pennsylvania before William Penn! I spent the summer learning all about "New Sweden" along the Delaware River that was settled starting in 1638. On 27 September 1997, the descendants of the Swedish colonists held several events in Pennsylvania and Delaware to celebrate their heritage. I attended the annual Mans Jones Day in Berks County at the house owned by one of my ancestors in 1701.[2]   The Historical Preservation Trust of Berks County had people dressed in colonial garb and I ate lunch in the nearby colonial tavern. The next day the state of Delaware sponsored the launch of a replica of a Swedish ship, the Kalmar Nyckel, which brought many of the Swedish colonists to America. It is to be the official "tall ship" of Delaware because the first landing of the original Kalmar Nyckel was near present-day Wilmington.[3]

One of the most prized treasures coming from one of the wooden trunks was a letter. Dad's aunt Mary had written the letter to her uncle who was living in  Delaware County in 1895. The letter was a description of the birth of my dad who weighed ten pounds. His exhausted mother allowed her mother to choose the family name, Joseph. What a wonderful document this letter is! Many baby pictures and unlabeled family photos were also part of the trunk's treasures.[4]

It is such a wonderful gift to be able to honor those who came before us and understand ourselves a little better as a result of getting to know them.  Knowing that sometimes we are lucky to stumble over artifacts to illuminate their lives makes the journey that much more special and aids in honoring our ancestors. 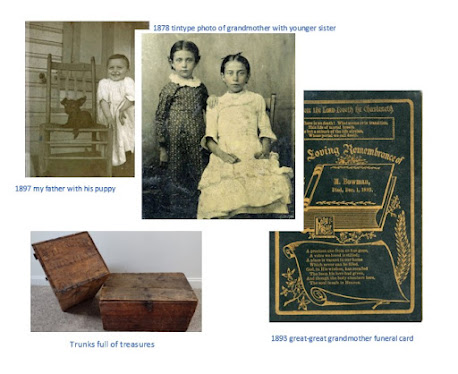 trunk found in the home of Joseph R. Bowman, the grandson of Philip Eisenberg Heavner. Joseph was raised in Philip's

home and inherited many family documents and photos when his mother, then grandparents died. Philip's wife

to be a brochure handed out at a family reunion.

accessed 16 July 2022); originally published by the Historical Committee of the Eisenberg-Jones Family Association,

[ADDRESS FOR PRIVATE USE,] Pennsylvania, 1997. Found in the basement workshop of Joseph R. Bowman at his home in

Daughter Carol remembers her father viewing pictures of his mother in the workshop ca. 1965, probably taken out of the

Posted by Ancestor Encounters at 11:54 AM